I want to begin by saying that we are in this together. Now, I know you’ve likely heard this many times in reference to current conditions, but at Mazak, we take this to heart. We take this to heart not only because we share many of the same challenges you face today as a local manufacturer ourselves, but because we are a family company and in times like these, we believe in showing up for your family. And we will always show up for you.

There is no doubt that your work is essential, and as a result, we are committed to doing everything we can to support you. In the coming days and weeks, we will provide additional resources to help guide all of us through these changing times and will continue to keep you informed through email, our website and social media channels. Together, we will emerge from this stronger than ever before. We are in this together. 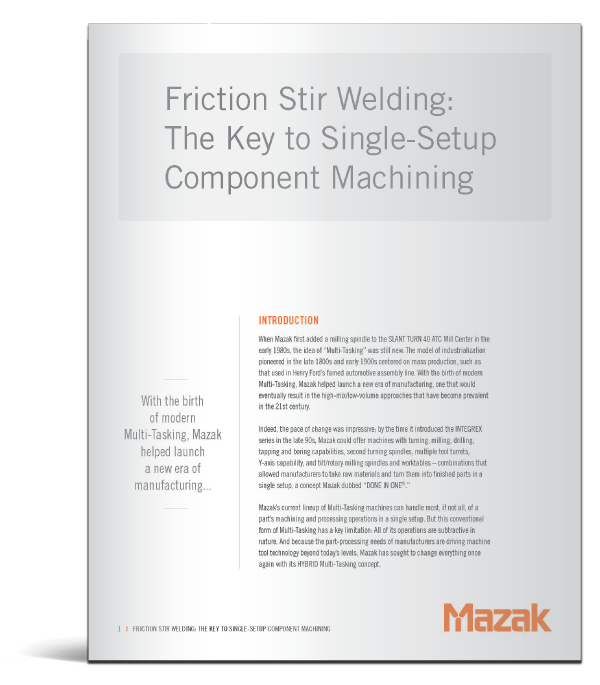 When Mazak first added a milling spindle to the SLANT TURN 40 ATC Mill Center in the early 1980s, the idea of “Multi-Tasking” was still new. The model of industrialization pioneered in the late 1800s and early 1900s centered on mass production, such as that used in Henry Ford’s famed automotive assembly line. With the birth of modern Multi-Tasking, Mazak helped launch a new era of manufacturing, one that would eventually result in the high-mix/low-volume approaches that have become prevalent in the 21st century.

First introduced by The Welding Institute in 1991, friction stir welding generates heat with friction using a rotating pin pressed against a workpiece. Particularly useful with metals with low melting points, including aluminum, FSW creates joints that require little post-processing, use no filler material, resist corrosion and produce a wide range of join types, including hollow ones. Furthermore, FSW can even join dissimilar metals, which represents a major step forward in welding technology.